The person who may be the nation's first Second Gentleman is a mystery to most Americans, as someone who has largely stayed in the background of his wife Kamala Harris' career.

Background
Douglas Emhoff, 55, was born to Michael and Barbara Emhoff in the New York City borough of Brooklyn in 1964, and was raised in New Jersey before moving with his family to California as a teenager.

Emhoff graduated from Agoura High School, earned a Bachelor of Arts degree from California State University, Northridge and a Juris Doctor from the USC Gould School of Law.

He began his career at Pillsbury Winthrop's litigation group, and in the late 1990s moved to Belin Rawlings & Badal, a boutique firm in Los Angeles, where he established himself as an entertainment lawyer.

One of his first cases was defending Hollywood Video in an accounting dispute with Fox, which led to ongoing work with the studios - and representation of dozens of production companies in an industry-wide class action.

Douglas Emhoff has since represented studios and streamers in everything from copyright disputes to contract issues and antitrust matters, as well as, according to his official bio, "large domestic and international corporations and some of today's highest profile individuals and influencers in complex business, real estate, and intellectual property litigation disputes." 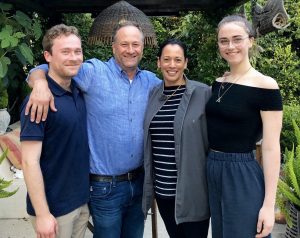 Emhoff and Harris with his children Cole and Ella, who call her "Momala" (twitter)

In 2000, he opened his own Beverly Hills firm with fellow USC alum Ben Whitwell, which grew to 12 attorneys before it was acquired in 2006 by Venable, where Emhoff spearheaded the firm's West Coast expansion. Emhoff joined DLA Piper as a partner in 2017, splitting his time between its Washington, DC, and Los Angeles offices.

Following the announcement Kamala Harris would be Joe Biden's running mate, six years to the month after they were married, Emhoff took a leave of absence from DLA Piper.

Personal
Emhoff was married for 25 years to Kerstin Emhoff, née Mackin, an award-winning film producer and founder and CEO of the production company Prettybird. They have two children, Cole and Ella, named after John Coltrane and Ella Fitzgerald. 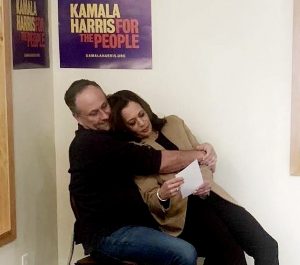 Emhoff Tweet: "@KamalaHarris: I love you, I believe in you, and I'm so proud of you. The whole country is going to see what I get to see everyday. You are amazing"

In her book, "The Truths we Hold," Harris writes that in their first phone conversation they hit if off immediately "cracking each other up, joking and laughing at ourselves and with each other, just the way we do now."

Emhoff emailed her the morning after their first date outlining his available dates for the next couple of months and telling her he was "too old to play games or hide the ball" and "I really like you, and I want to see if we can make this work."

They married less than a year later on August 22, 2014, in a civil ceremony in Santa Barbara, California, with Kamala's sister Maya Harris officiating.

Emhoff wore a garland as a nod to Harris's Hindu roots, and she broke a glass to honor his Jewish heritage. Harris is called "Momala" by Emhoff's children and has a close friendship with his first wife, Kerstin.

The Campaign
Emhoff has embraced his wife's "endlessly fascinating" career and campaign, and his role as devoted spouse, right-hand man, occasional speaker and sometimes rescuer. 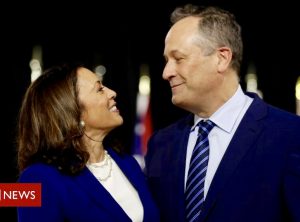 "They still seem to radiate newlywedism," said a friend (BBC)

When an animal rights activist famously rushed the stage at a 2019 MoveOn forum, snatching away Senator Harris' microphone in an effort to speak to the crowd, Emhoff was quick to react, jumping up onto the platform to help drag the protester away. "There was something kind of superhero-ish about it," said one observer. Video of the incident blew up on social media.

Moments like that have made him a bit of an instagram and twitter celebrity, where, as Kamala's "No. 1 fan" he posts behind the scenes pictures of life with the candidate.

His personal causes include community, civic and charitable activities that include legal aid, human rights, social justice and the well-being of children. When not campaigning with his wife, according to his twitter account, he loves to play golf and fantasy football.

For a List of Biden-Harris Fundraisers, go to the DemList Election Calendar

January 6, 2021 Democrats appeared to have triumphed in both Georgia Senate Runoff elections last night – delivering what is expected to be two astounding victories and, with them, control...

February 8, 2021 As the Senate begins the second impeachment trial of Donald J. Trump this week, trackers and pundits are counting the votes in what seems an uphill battle to convict the former...