On Friday, on the annual anniversary of Juneteenth, House Speaker Nancy Pelosi oversaw the removal of portraits of four Confederates and former House Speakers from the halls of the United States Congress.

"There is no room in the hallowed halls of Congress or in any place of honor for memorializing men who embody the violent bigotry and grotesque racism of the Confederacy." - Speaker of the House Nancy Pelosi 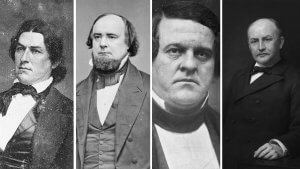 Portraits of the four Confederates removed from the US Capitol: Robert Hunter, James Orr, Howell Cobb and Charles Crisp (wiki)

A similar resolution by Senator Cory Booker (D-NJ), to remove Confederate statues from the US Capitol, was blocked by Senate Rules Committee Chairman Roy Blunt (R-MO).

Last Friday night, protesters in the nation's Capitol toppled the only outdoor Confederate memorial in the city -- a statue of Confederate General Albert Pike.

At the same time, protestors on Friday dismantled parts of a Confederate monument in Raleigh, North Carolina.

The heightened campaign to tear down symbols of the Civil War-era slaveholding Confederacy comes amid a month of national unrest following a series of tragic killings by police of Black Americans. 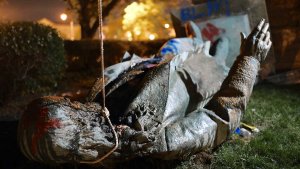 While the dispute has been underway for years, the 2015 massacre of nine black parishioners in a Charleston church, by self-proclaimed white supremacist Dylann Roof, spurred a renewed effort to remove statues, flags and other memorialization of the Confederacy from public property.

Although the Confederate remembrances once symbolized service, sacrifice and heritage to many, in modern times they have grown to be associated with white supremacy ideology and its followers who, like Roof, brandish them in the name of racism.

The issue once again dominated the headlines in August of 2017 when, in Charlottesville, Virginia, a "Unite the Right" rally protesting the removal of a statue of Robert E. Lee, the leader of the Civil War's Confederate army, turned into a full-blown riot.

Alt-right, torch-wielding white nationalists violently clashed with police and counter-protestors, ending when one drove his car into the crowd, injuring 30 people and killing 32 year-old Heather Heyer. 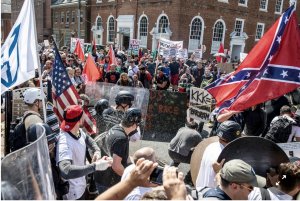 President Donald Trump famously responded to the hate-driven violence saying there were "some very fine people on both sides."

Trump has opposed the removal of Confederate symbols, saying our country's history and culture were being "ripped apart."

According to a 2017 study by the Southern Poverty Law Center, however, many of the statues were not erected as monuments to the past, but rather in response to the evolving civil rights movements of the future.

The largest peaks in appearance of Confederate symbols came in the early 1900s, when states were enacting Jim Crow laws to disenfranchise black Americans; after the US Supreme Court's 1954 ruling desegregating schools; and following the civil rights protests of the 1960s.

There are over 700 of these monuments left, more than 30 of which have been built in the past two decades.

Now, 155 years after the end of the Civil War, and one month after the killing of George Floyd that spurred a national rebellion against acts of discrimination and oppression, the public outcry is finally shifting. 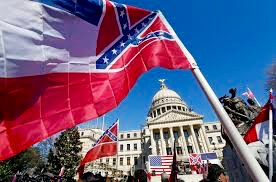 Mississippi, the last state to display an image of the Confederate battle flag, is considering bipartisan legislation this week to change the flag (RogelioSolis/AP)

Across the country, public officials and private institutions have been rethinking symbols of the Confederacy.

Since 2015, at least 145 Confederate symbols, primarily in the South, have been removed from public spaces.

NASCAR has banned the Confederate battle flag from its auto racing events and properties.

The National Collegiate Athletic Association (NCAA) has barred any collegiate championship events from being played in states where the flag is prominently displayed.

The Marine Corps and Navy have banned Confederate flags on all military bases and installations, and the Army is expected to follow suit soon.

Two weeks ago, the Pentagon announced that Secretary of Defense Mark T. Esper and Secretary of the Army Ryan McCarthy were "open to a bipartisan discussion on the topic" of removing Confederate names from military bases. 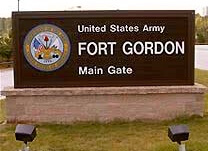 Fort Gordon in Augusta, Georgia, was named after Confederate General John Brown Gordon, who was a member of the Klu Klux Klan (military.com)

While retired US Army General and former CIA Director David Petraeus hailed the announcement as "the right call" in an op-ed titled Take the Confederate Names Off Our Army Bases, President Trump said "my Administration will not even consider the renaming of these Magnificent and Fabled Military Installations."

A June 6-7, 2020 Morning Consult Poll of registered voters (MOE: +/- 2%) showed 53% of Democrats say Confederate statues should come down, compared to 11% of Republicans.

The same poll showed 58% of Democrats see the Confederate flag as a symbol of racism, compared to 13% of Republicans.

The battle, it appears, is far from over.

November 16, 2018 Every few months we like to do a humor roundup, as a reminder there are still reasons to laugh. Stephen Colbert The president’s anger over his loss has reportedly seen him...

March 4, 2020 In a stunning turn of events yesterday, Joe Biden won ten states to Bernie Sanders three in the Super Tuesday primaries, historically reshaping the 2020 race for the White House...