The four-night "unconventional convention" innovatively intertwined the voices of our national leaders with the compelling stories and words of everyday Americans, and successfully painted a picture of a nation devastated by the crises in our country and in our White House.

In the end, however, it was our nominee himself who sealed its success, with the speech of a lifetime, one  that took its audience beyond the fear of another Trump administration -- to the hope of what would be possible under the leadership of Joe Biden.

NIGHT ONE: Monday's "We the People," looked at the monumental challenges we are confronting as a country: The COVID-19 pandemic, millions of people out of work, and racial injustice that has marginalized too many people.

From the multicultural, country-wide choir singing the National Anthem and moving musical performances to the speeches and video of Biden's conversations with victims of the crises that are facing our country, the first night highlighted the disasters of the Trump administration, and Democratic messages of hope and unity.

Sanders: "Joe Biden will begin the fight on day one" (Click), United We Stand: Joe Biden's former primary opponents (Click), Michelle: "Being president doesn't change who you, it reveals who you are" (Click)

NIGHT TWO: Tuesday's "Leadership Matters" focused on the need for real leaders in our country, one with the experience and character to meet the moment. A leader who will unite us, tell us the truth, take responsibility, listen to experts and be an example for the nation.

From activists and veterans, national security and healthcare experts and two former Presidents, we heard appeals to rise up and restore honesty and integrity to our government, and stake out a renewed leadership role in the world.

A Different Kind of Keynote. The Dem Party's Rising Stars (Click), Colin Powell: Biden "will restore America's leadership and moral authority" (Click), Former President Bill Clinton "It's a clear choice. The future of our country is riding on it." (Click)

It was our future First Lady, her story and her voice, that stole the hearts of Americans as she explained her unshakeable faith in her husband to heal and lead a nation.

NIGHT THREE: Wednesday's "A More Perfect Union," featured the voices of gun violence survivors, victims of Trump's immigration policy, and young climate activists to those suffering under a collapsed workforce.

We saw inspiring videos marking the 100th year anniversary of the 19th Amendment and Joe Biden's leadership on the Violence Against Women Act, highlighting his record on equal rights for women.

A Letter to Donald Trump:  "Instead of protecting us, you tore our world apart" (Click), America Rising: Immigrants Rebuilding America. Narration: Barack Obama (Click), Giffords: "America needs all of us to speak out, even when you have to fight to find the words" (Click)

In a pair of somber speeches delivered with dignity, Former Secretary of State and 2016 Democratic nominee Hillary Clinton, and Former President Barack Obama, spoke to the state of the country and the presidency, warning of the consequences of not voting.

Hillary Clinton: "This can't be another woulda-coulda-shoulda election" (Click), America Rising: Women's Suffrage to Women's March. 100 years since women won the right to vote (Click), Barack Obama: "What we do in the next 76 days will echo for generations to come" (Click)

In her acceptance speech, vice presidential nominee Kamala Harris laid it on the line with a challenge to the country.

"I am here tonight as a testament to the dedication of generations before me: women and men who believed so fiercely in the promise of equality, liberty, and justice for all. 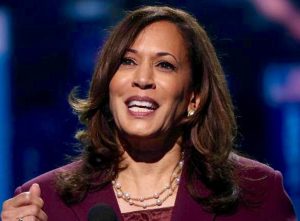 Kamala Harris: "There is no vaccine for racism" Click

...Make no mistake, the road ahead will not be easy. We will stumble. We may fall short. But I pledge to you that we will act boldly and deal with our challenges honestly. We will speak truths. And we will act with the same faith in you that we ask you to place in us.

...Years from now, this moment will have passed. And our children and our grandchildren will look in our eyes and ask us: Where were you when the stakes were so high? They will ask us, what was it like? And we will tell them. We will tell them, not just how we felt. We will tell them what we did." -- Kamala Harris

NIGHT FOUR: On the final night of the convention, "America's Promise," we heard from Biden's friends, colleagues, primary opponents and family, before the former Vice President delivered his historic acceptance speech.

The measure of a president is the same as the measure of a person: Joe Biden is a good man who believes in the promise of America, and as president, he will deliver on that promise for all.

Brayden Harrington: "Kids like me are counting on you to elect someone we can all look up to" (Click), John Meecham: "History, which will surely be our judge, can also be our guide" (Click), Congresswoman Deb Haaland: "The promise of this country is older than our constitution" (Click) 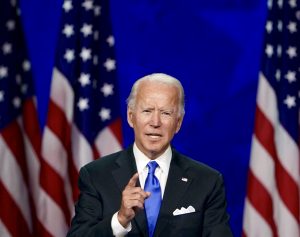 "This is a life-changing election that will determine America's future for a very long time.

... And we have a great purpose as a nation: To open the doors of opportunity to all Americans. To save our democracy. To be a light to the world once again. To finally live up to and make real the words written in the sacred documents that founded this nation that all men and women are created equal. Endowed by their Creator with certain unalienable rights. Among them life, liberty, and the pursuit of happiness." -- Joe Biden

A Special Thanks to the DemList Convention Crew! Allen, Anita/Mom, Haley and Ashley